I’ve finally finished watching all three extant seasons of The Expanse (about which I’ve blogged previously), and continue to be enthusiastic.

While many characters and plotlines from the books get frustratingly dropped or condensed in the third season, others (e.g., the role of Drummer) get interestingly expanded; in particular, the villains (or anyway antagonists – not always strictly villains) such as Sadavir Errinwright, Esteban Sorrento-Gillis, Jules-Pierre Mao, and Klaes Ashford tend to be much more interesting and complicated in the tv series than in the books. 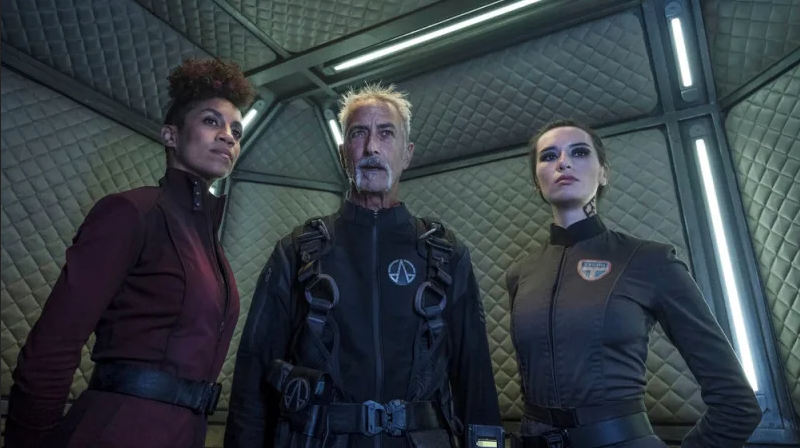 Yeah, they’re all on friendly terms in THIS pic.

The fourth season is currently in production. If it follows the fourth book (there’s been a rough, though not exact, correspondence between books and seasons so far), it’ll be a bit of a change of pace – which I hope won’t drive viewers away, because I really want to see an adaptation of the fifth book, which inter alia explores Naomi’s and Amos’s backstories as their respective pasts come back to haunt them.

If Gawain made an apt pairing with Beowulf, so this adaptation (2001) of a Scottish folktale makes an apt pairing with Gawain, as this story’s magical Green Man with his three sinister tests and his magically helpful female relative seems akin to the Green Knight (though the tropes of three sinister tests, and magically helpful female relatives of the villain, are not exactly uncommon in folklore). Once again, as with Beowulf and Gawain, the animation is lovely and atypical.

I’m not sure that Middelboe was involved with this particular episode, but it’s part of the ”Animated Tales of the World” series (most of them Welsh/Russian collaborations) on which she worked as editor, and I’m really just using her name as a handy tag for these various animated-adaptations-of-classic-stories series which share both a common sensibility and a number of recurring artists and actors, usually but not always including Middelboe. And because it’s a cool name.

“Drive-In Saturday” imagines a post-apocalyptic future in which people must turn to old books and movies to remember how to have sex:

“Sexcrime” was written for, but not (or barely) used in, the 1984 film version of 1984; it refers to the ban, in Orwell’s dystopia, on all sexual activity for any purpose other than reproduction. Annie Lennox, as often, looks a bit like Bowie’s long-lost sibling: