Three songs today instead of two! Well, it’s hard to separate these three; and you know I’m not fanatical about rules. (As my friend Josef Šíma likes to say, “We are not Prussians.”)

Elton John’s song “Rocket Man” is well known (in fact an Elton John biopic with that title is in theatres now), but another, less famous “Rocket Man” song preceded it by two years:

This “Rocket Man” song is heavily inspired by the Ray Bradbury story of the same name. As in the Bradbury story, this song’s rocket man is a kind of addict (like Major Tom), but addicted to outer space rather than to a drug:

Elton John’s “Rocket Man,” while echoing the Bradbury story and/or Pearls song to some extent, seems to owe more to Bowie’s “Space Oddity” than to Bradbury.

The line about being as “high as a kite” has also been read as yet another space-travel-or-drug-use ambiguity.

The 2017 music video, by Iranian dissident and refugee Majid Adin, adds yet another layer of meaning, by turning space flight into a metaphor for Adin’s own experience smuggling himself from Iran into London:

If “Ashes to Ashes” left it ambiguous whether space flight was being used as a metaphor for drug addiction or vice versa, there’s no such ambiguity here. 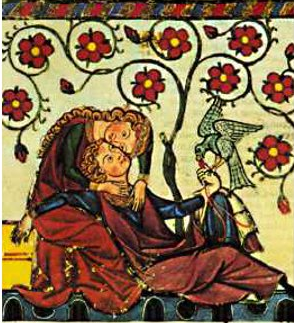 Most versions of the story of Tristan/Tristram and Iseult/Isolde end tragically for the adulterous lovers, but there is at least one exception: a 16th-century Welsh manuscript (possibly reflecting earlier manuscripts now lost, possibly not) in which King Arthur intervenes to adjudicate a compromise, whereby Iseult’s husband Mark/March and her lover Tristan will alternate cohabiting with her in a kind of connubial time-share.

Several things strike me about this story.

1. This is, more or less, an example of what might be called a “magic loophole” story. (Less, because in this case magic is not actually involved, though otherwise the style of reasoning is similar.) Another, more typically magical example, also Welsh, is the tale of Lleu Llaw Gyffes, who enjoyed magical protection from being killed either by day or by night, either naked or clothed, either indoors or outdoors, either on horseback or on foot – and so he is maneuvered by his wife (he seems to have been very trusting) into standing with one foot on the back of a goat (or, in some versions, a deer) and the other in a tub under an awning, at twilight, wrapped only in a fishnet. (A similar, but non-magical, story, the German fairy-tale “The Peasant’s Wise Daughter,” also involving the fishnet solution, is discussed by Wittgenstein in his 1932-1935 Cambridge lectures. A Masonic ritual also requires the initiate to appear “neither naked nor clad, neither barefoot nor shod” – which apparently turns out to mean wearing a sheet and one shoe.) 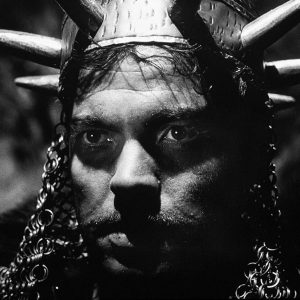 To modern readers, the best-known examples of magic-loophole stories are probably Shakespeare’s Macbeth, who cannot be killed by any man of woman born, nor until Birnham Wood marches upon his castle – only to be killed by a man born from Caesarian section, leading an army marching with boughs cut from Birnham Wood (one feels Macbeth would be justified in appealing the dodgy interpretation) – and Tolkien’s Witch-king, who cannot be killed by any man, period, but, it turns out, can be killed by a female human and a male hobbit. For some other examples (by no means a complete list), see the relevant TV Tropes page, particularly the “Folklore” and “Myths and Religion” sections. 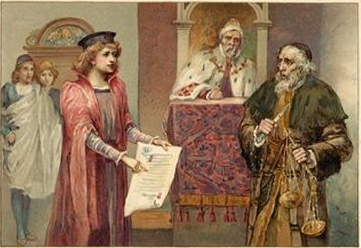 2. But the story that this variant Iseult tale most reminds me of is that of Portia in Shakespeare’s Merchant of Venice. Here again the tale turns on the parsing of a legal agreement rather than actual magic; and here again it is a woman who offers the decisive legal interpretation – in this case, that Shylock cannot claim his contractually owed pound of flesh from Antonio, since there is no way to obtain it without drawing some of Antonio’s blood as well, and Shylock is owed only flesh, not blood; and so Shylock (like Mark) gets nothing, and Antonio (like Tristan) gets everything.

3. Moreover, the Welsh variant version of the Tristan-Iseult tale represents an interesting turn in the literature of courtly love (not to be confused with Courtney Love). While the “free love” movement, with its criticism of coercive legal marriage as incompatible with genuine romantic attachment, is usually dated to the 19th century (see Hal Sears’ The Sex Radicals), the late mediæval courtly-love movement in literature, with its celebration of adulterous liaisons, was making the same point as early as the 11th century. As C. S. Lewis (of all people) points out in The Allegory of Love: A Study in Medieval Tradition: “Any idealization of sexual love, in a society where marriage is purely utilitarian, must begin by being an idealization of adultery.” 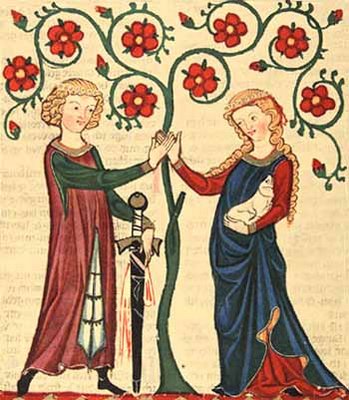 However, in most versions of courtly-love narrative these adulterous liaisons were supposed to remain unconsummated – a concession to the Church’s condemnation of adultery, though obviously not to the Church’s more expansive definition of adultery, namely that “whosoever looketh on a woman to lust after her hath committed adultery with her already in his heart” (Matthew 5:28). On the contrary, the courtly-love literature regarded adulterous liaisons, so long as they were unconsummated, as spiritually ennobling – one of many ways in which ecclesiastical claims to define the requirements of spirituality were routinely challenged in the Middle Ages, contrary to popular visions of mediæval society as completely under the intellectual sway of the Church.

But while unconsummated adulterous relationships were celebrated in this literature, consummated ones, by contrast, were generally portrayed as doomed, and indeed as rightfully doomed. [September 2019 addendum: This last remark is not true; I wrote on the basis of popular stereotype and inadequate research.] That is what makes the Welsh version of the Iseult legend so striking: both Arthur’s proposed time-share compromise, and Iseult’s final victory in gaining full-time cohabitation with Tristan, push still further the boundaries of the courtly-love tradition’s challenge to ecclesiastical authority on the question of the legitimacy of extramarital love.

4. A further point: following up on my preceding remark about the mediæval Church’s hold on thought being less all-encompassing than is usually thought, I here offer a few further examples.

a. It’s a matter of scholarly debate how often ordinary people attended Church in the Middle Ages; but at any rate the Fourth Lateran Council of 1215 felt it necessary to decree that everyone should take communion and go to confession at least once per year.

There are many people who do not believe that God exists, nor do they think that the human soul lives on after the death of the body. They consider that the universe has always been as it is now and is ruled by chance rather than by Providence. (Quoted in Danny Danziger and John Gillingham, 1215: The Year of Magna Carta, p. 203).

c. While Geoffrey Chaucer appears to have been more religiously orthodox than whatever people Peter of Cornwall was complaining about, his Canterbury Tales do display a less-than-reverential attitude toward the clergy. To quote just one instance out of many: 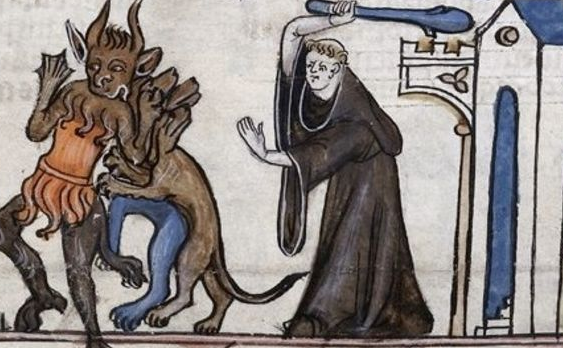 In the old days of King Arthur
of whom the Britons speak great honour,
this land was filled with many a fairy;
the Elf-Queen, with her jolly company,
danced full oft in meadow green and vale,
or so, be you assured, runs the tale:
I speak of many hundred years ago,
for now no man can see elves any more,
for now the great charity and prayers
of limiters [= begging monks] and other holy friars
that overrun every land and every stream
as thick as motes in the sunbeam,
blessing halls, chambers, kitchens, bowers,
cities, towns, castles, high towers,
villages, barns, stables, dairies –
this ensures that there are no fairies,
for there where once was wont to walk an elf,
there walks now the limiter himself
in afternoons and in mornings
and says his matins and his holy things
as he goes about his limitation [= the district within which a limiter was authorised to beg].
Women may go safely up and down:
in every bush and under every tree
there is no other incubus than he
and all that he will do them is dishonour [i.e. by raping them]. 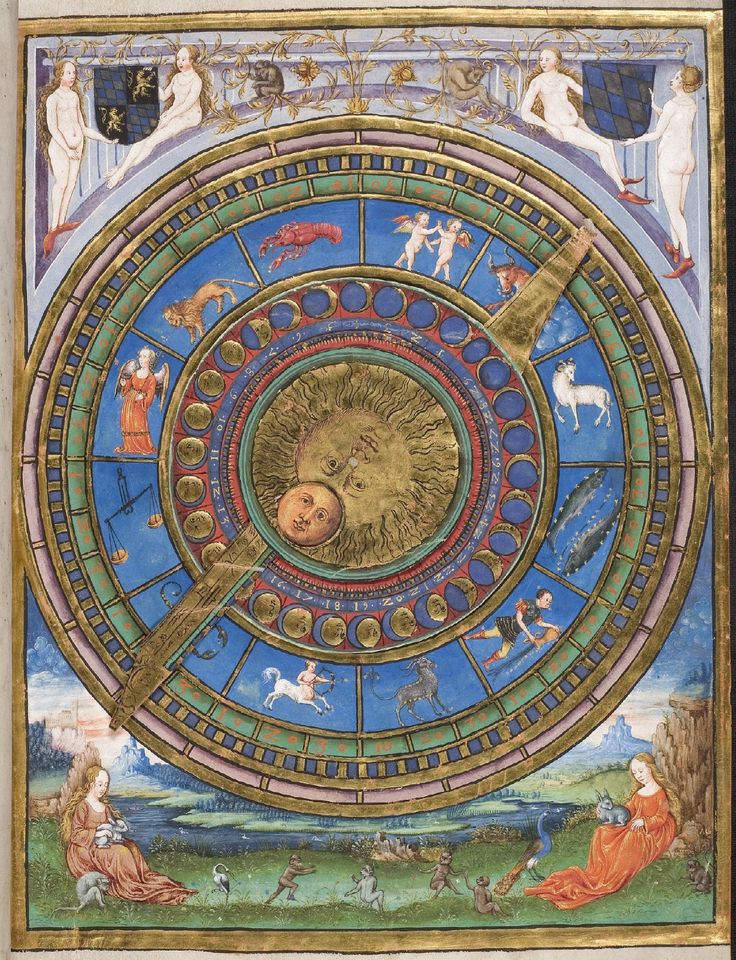 d. While the worship of the pre-Christian Greek and Roman gods was sharply proscribed by mediæval ecclesiastical authority (such gods being identified with Satan and his demons), invocation of these gods as beneficent or at least neutral spiritual forces was common in the fields of alchemy and astrology, as Jean Seznec documents in his book The Survival of the Pagan Gods: The Mythological Tradition and Its Place in Renaissance Humanism and Art. (Despite the title, the book covers the mediæval period too, not just the Renaissance.) The Church’s attitude toward these disciplines was ambivalent; taken too far they could incur charges of witchcraft, but pursued in due measure they could be undertaken by someone as innocuously orthodox as Albertus Magnus, the teacher of Aquinas. (Of course Albertus and Aquinas both played a central role in injecting the suspiciously pagan and/or Islamic doctrines of Aristoteleanism into Christian theology.)

e. Aquinas’s contemporary Siger of Brabant, leader of a movement called Latin Averroism (though how far it followed the actual ideas of Averroës a.k.a. Ibn Rushd remains a matter of dispute), defended the autonomy of philosophy vis-à-vis theology and denied personal immortality. While Siger’s doctrines were condemned by the Church and ridiculed by Aquinas, the pious Dante in his Divine Comedy locates Siger in Paradise rather than in Hell or Purgatory.

f. A 12th-century English labourer, reproached by a churchman for working on a feast day (that of St. Erkenwald), reportedly replied:

You clerics have so much time on your hands that you meddle with what’s none of your business. You lot grow fat and soft with idleness, you don’t have a real job, your life is just a game or a play. You clerics with your everlasting useless dirges despise us, though we are the ones who do all the real work. And then you go and bring in some Erkenwald or other to justify your idleness and to try to stop me doing the job that I need to stay alive. You might just as well tell me I can live without eating as tell me to stop working. Why should I pray alongside drones like you? When we’ve made a bit of money, enough so we can eat – and a bit more too, so we can drink – then we have a holiday, and a good time dancing and singing. You keep your festivals, your mouldy old tunes and your Erkenwald to yourselves. Leave us alone. (Danzinger and Gillingham, p. 204)

The story has an edifying moral: the labourer is instantly struck dead after delivering this diatribe. But whether this precise incident ever occurred, the need to relate it suggests that the labourer’s position was widely shared.

g. As I wrote back in 2003, in criticism of the official Objectivist view of the Middle Ages as “an era of mysticism, ruled by blind faith and blind obedience,” and committed to “[h]ating this earth” as “a prison where man is doomed to pain, misery, calamity,” where “pleasure is evil, and virtue consists of renunciation”:

Once we broaden our focus from the medieval philosophers (who were, after all, mostly monks and priests) to medieval culture generally, including the rich, exuberant, imaginative, secular atmosphere of medieval literature, with its focus on romantic love and heroic adventure, the picture begins to look less dark. … And if you think medieval art is about nothing but crucifixion and self-flagellation, take a look at some of the hauntingly beautiful treasures in France’s Musée du Moyen Age.