Has any other pop star written a hostile song about himself from the standpoint of his disgruntled and resentful back-up band? 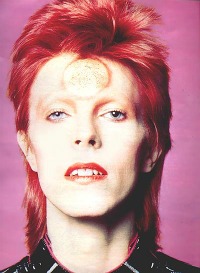 Of course Bowie makes sure to have his band compliment his talent (“boy, could he play guitar”) and his appearance (“God-given ass”) along with their complaints about being relegated to back-up status (he “became the special man; then we were Ziggy’s band …. So where were the Spiders?”) while he “took it all too far” and was “making love with his ego.” And although the official moral of the song is supposed to be Bowie/Ziggy’s destructive vanity and narcissism, the band’s plotting to “crush his sweet hands” suggests rather that Bowie is casting the Spiders in the role of Nietzsche’s envious Untermenschen. (“Before you they feel petty, and their baseness glows and smoulders against you in invisible revenge,” Nietzsche writes in Zarathustra.) Small wonder that the partnership broke up unhappily soon after. (I love Bowie as an artist; but like many of my favourite artists, he seems to have been a bit of an asshole, especially – though not exclusively – during his early years.)

According to Wikipedia, the name “Spiders from Mars” was inspired by a “UFO sighting, where a stadium crowd thought they had witnessed Martian spacecraft, which turned out to be migrating spiders” – which, yes, is totally a thing:

But of course Nietzsche also uses spiders in Zarathustra as a metaphor for envy-ridden egalitarians. And Ziggy’s own status as either an extraterrestrial, or else a human specially chosen as a spokesman by extraterrestrials (depending on which interview Bowie was giving at the moment), cast Bowie neatly in the role of the “Homo superior” of “Oh You Pretty Things,” even if at other times he suggested that he was merely the harbinger of a development that he expected would surpass him and leave him behind. The song straddles self-aggrandisement and self-mockery – both genuine, I suspect:

And continuing the Nietzschean theme of the resentment of the lesser against the greater: