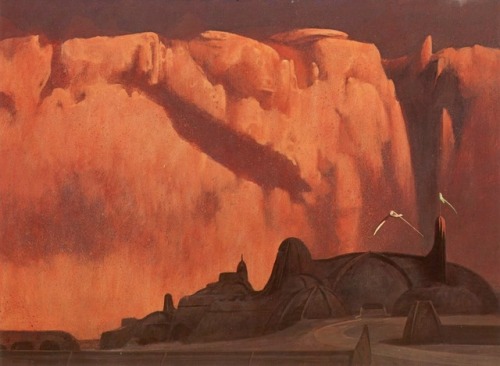 As Denis Villeneuve’s star-studded first installment of what Dune fans hope will be an adaptation of the entire saga or at least a decent chunk of it (though I wonder how contemporary American audiences will react to a story in which the heroes are explicitly Arabic-inflected mujahideen and jihadis fighting to protect their desert world and its one major hyper-lucrative natural resource against foreign imperial powers and corporate cartels) heads toward its premiere some time in 2020 – along with a spin-off tv show about the Bene Gesserit, unaccountably called Dune: The Sisterhood rather than Spice Girls – I thought a quick look back at previous attempts might be worthwhile.

1. In the mid-1970s, Alejandro Jodorowsky began planning what at one point was described as a 14-hour film. Funding fell through and no film was ever produced, but at least an excellent documentary has been made about the project. Jodorowsky’s enthusiasm is infectious, and the film would surely have been memorable (if only because batshit-crazy), but none of the imagery I’ve seen from the project really looks like Dune to me. (The most Dune-looking movie I’ve ever seen is actually Lawrence of Arabia)

2. In 1984, David Lynch’s adaptation lurched onto the screen, to widespread disappointment of fans (including this one). It’s hard to know how much of the blame to assign to Lynch, and how much to studio micromanaging. (There exists both a theatrical cut and an extended cut. Neither was approved by Lynch.) I reckon there’s plenty of guilt to go around. I mean, I’ll grant the film has some good bits – moments when the magic of the original story shines through. But it buries those monents under weird story choices (we hates the Weirding Module forever), horrible casting decisions (including the too-old and too-stolid Kyle MacLachlan as the lead), and one of the most painful opening narration sequences ever inflicted on a hapless audience.

3. and 4. The Sci-Fi [as Syfy was then known] Channel’s 2000 miniseries Dune, and its 2003 follow-up Children of Dune (which in fact adapts, if rather hurriedly, both Dune Messiah and Children of Dune), are actually pretty good, and deserve to be better-known than they are. (Most news stories on the Villeneuve project give the impression that the Lynch film was the only predecessor.) But for budgetary reasons, they are shot (by directors John Harrison and Greg Yaitanes) entirely in the studio – against the background of some admittedly quite pretty desert paintings – rather than in any actual desert locations. Imagine Lawrence of Arabia shot that way and you’ll see the problem. (Villeneuve, by contrast, is filming in Jordan.)

Addendum: Incidentally, I found an old comment of mine from 2007:

I remember my sinking feeling at the opening moments of Lynch’s Dune, when Irulan, looking more like Barbie than like a shrewd political operative, started reading blandly and incoherently while her face inexplicably faded in and out against a background of stars. And the rest was no improvement: a rigid, lifeless Paul flying around in a rigid, lifeless ornithopter; Baron Harkonnen’s sore-covered body; weirding modules; the Toto score; a desert that looked more like a waterless beach than the magical Arizona desert or the mysterious Sahara — Aaagh! and I repeat, Aaagh!

a) Here’s the opening I complained about above. The actress isn’t as bad as I remembered. But why on earth does she keep fading in and out? And why that bit about forgetting to tell us? It makes her seem a bit scatterbrained, and the Irulan of the books is anything but. (Her dialogue also gets the relation between spice and folding space wrong, but at this point, whatever.)

That’s from the theatrical version. I have to admit that the interminable infodump at the beginning of the extended edition is even worse, not to mention the incredibly lazy low-budget visuals (plus it turns the Butlerian Jihad into a Crusade, with giant crosses to match!):

Two secret scientific experiments, one governmental and one private. The governmental one is reminiscent of Project X in Atlas Shrugged; the private one, of H. G. Wells’ “The Chronic Argonauts.”

(So what happened to Experiments I, II, and III? Or is it safest not to ask?)