You Will Live Under the Sea, this (quite beautiful) book assured me when I was a kid: 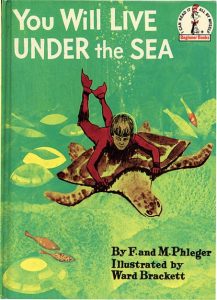 A companion volume added that I would also go to the moon, just like Bobby and Betty.

Well, I don’t think any of that’s quite going to work out. But here are three songs about the life submarinous:

This song was presumably the inspiration for Hagbard Celine’s golden submarine in the Illuminatus books.

I first heard this song as a kid as part of the soundtrack for an underwater nature film at San Diego’s Reuben H. Fleet Science Theatre:

I’m ethically opposed to revenge, but aesthetically I often find it pleasing:

Plus an animated video:

And a partial other:

And a live-action cover version:

(The lead in this last oddly reminds me of Cary Elwes in The Princess Bride. The age gap between the two men looks a bit more than fifteen years, but ….)

(Clarificatory Edit: By “the two men” I don’t mean Cary Elwes and this guy; I mean this guy and his intracetaceous companion.)