There are a couple of stretches along First Avenue in Opelika where some buildings (including a factory) were demolished not too long after I first came to the area, and they’ve been slowly clearing away the rubble ever since. And I do means slowly, as in: with each passing year some slight alteration to the landscape is perceptible. The progress has been glacial (if anything under the Alabama sun can truly be called “glacial”).

But lately I’ve noticed a very slight acceleration in the rubble-clearing process, reminding me that these ruins will not endure forever. So I’ve kept meaning to take photos, but I never seem to have my camera with me when I pass by. But now that I have a smartphone I always have a camera with me, so today was the day.

Voltairine de Cleyre thought the ruins of modern industrial civilisation would compare unfavourably with those of past civilisations:

“And if some archaeologist of a long future shall some day unbury the bones of our civilization, where ashes or flood shall have entombed it, he will see this frightful idea stamped on the factory walls he shall uncover, with their rows and rows of square light-holes, their tons upon tons of toothed steel, grinning out of the skull of this our life; its acres of silk and velvet, its square miles of tinsel and shoddy. No glorious marbles of nymphs and fawns, whose dead images are yet so sweet that one might wish to kiss them still; no majestic figures of winged horses, with men’s faces and lions’ paws casting their colossal symbolism in a mighty spell forward upon Time, as those old stone chimeras of Babylon yet do; but meaningless iron giants, of wheels and teeth, whose secret is forgotten, but whose business was to grind men up, and spit them out as housefuls of woven stuffs, bazaars of trash, wherethrough other men might wade. The statues he shall find will bear no trace of mythic dream or mystic symbol; they will be statues of merchants and ironmasters and militia-men, in tailored coats and pantaloons and proper hats and shoes.”

And maybe so. Certainly some “bazaars of trash” are evident in these photos. But there’s a certain solitary grandeur evident in some of them as well.

My dear friend Paul Fine just sent me two photos from our college graduation in 1985. The first one shows me with my mother, the second shows me with Paul: 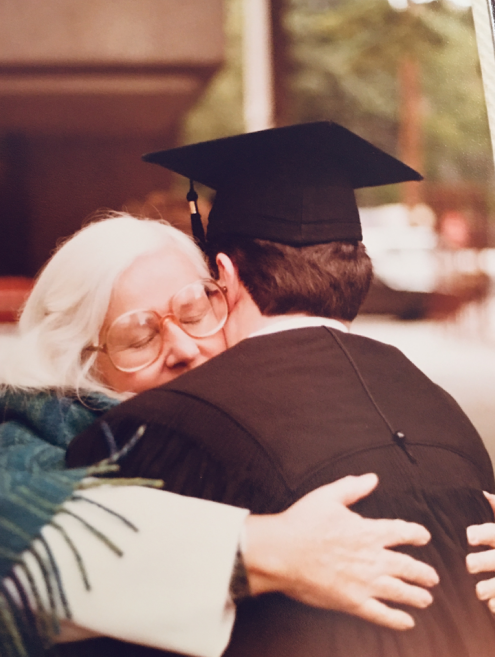 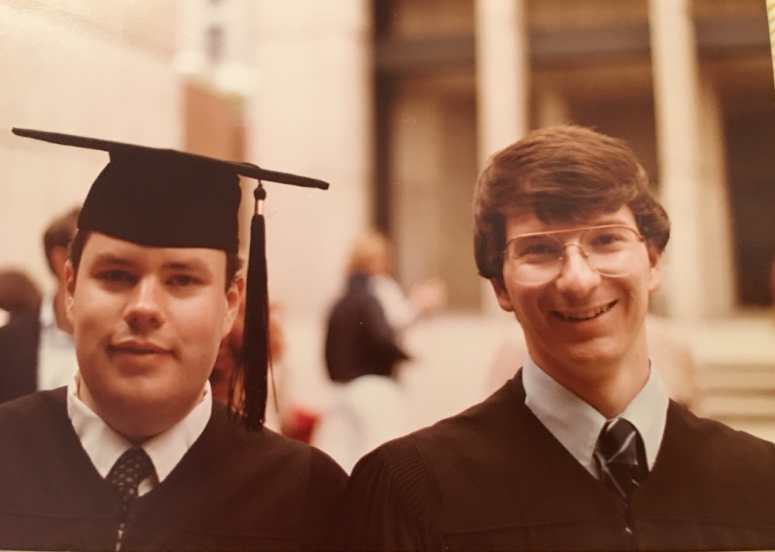 I’ve written previously about my late mother (see here and here), and there is much more to say if I ever have the time. But today, in honour of Father’s Day, I thought I’d say a little about my father. 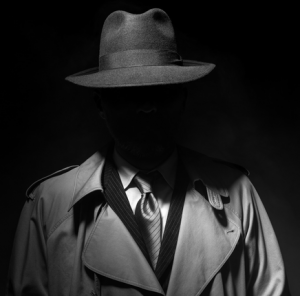 And a little is all there is to say. I don’t remember him; I don’t even have a photo of him (all photos were lost in a move – the reason that, ever after, my mother and I always took family photos with us in the car when we moved, rather than entrusting them to movers). He was raised in an orphanage, with no living relatives; I gather he did know the names of his deceased parents, but my mother didn’t know or didn’t remember. In fact my mother knew fairly little about him, but figured she’d have years ahead to find out. All I know about him is what I remember from my mother’s stories, which isn’t much, since in her later years the focus of her reminiscences slid back more and more to her childhood.

My father, Phillip (or Philip?) Patrick Long, was born on, I believe, 11 November 1922, in, I believe, Kansas. He was of Irish and Czech ancestry – on, I believe, his father’s and mother’s side respectively. The cause of his parents’ early deaths I do not know. He served in World War II, in the European theatre. He disapproved of fellow soldiers who came back with trophies from Germany, calling it stealing.

He attended either the University of Kansas or Kansas State University, but whether before the war, or after, or both, I’m not sure. Later he worked as a business consultant and efficiency expert, as well as in “oil sales,” whatever that is exactly. He met my mother at a party in, I believe, Newport Beach (I’m not sure of the year), though they didn’t get involved immediately.

He was very bright, with many interests – he taught my mother the phrase “spacetime continuum” (in what context I don’t know) which she in turn taught me at an early age. When he proposed to my mother, he did so in what she described as a cautious, abstract, intellectual way: “If person A and person B,” something something. But despite how that might sound they were wildly in love. I don’t know what year they married either; perhaps 1962? My mother always wore the unusual wedding ring he gave her (it’s hard to describe – varied gold and silver relief patterns) until to her great distress it slipped unnoticed off her finger in a Kroger grocery in Opelika a few years before her death and she was unable to find it.

While not particularly athletic by nature, he tackled a number of sports, not out of enjoyment but to prove to himself that he could master them. He didn’t like the bother of owning a car and preferred to lease one; he laughed at the sentimentality of my mother’s growing emotionally attached to her car. He generally found my mother too sentimental, teasing her over her religious views, her involvement in causes like the Anti-Vivisection League, and the like. But in their political arguments she managed to convert him from New Deal Democrat to Goldwater Republican. When he’d had a successful business deal he would light his cigarette with a burning hundred dollar bill; my mother believed he did this only in the knowledge that she would frantically put out the flame – the bills always survived.

He occasionally had a certain facial expression that my mother always distrusted, one that she thought meant he was trying to con her. But years later, when she discovered that I sometimes had exactly the same expression, she decided that perhaps she’d been mistaken.

Despite not having much money, my parents both loved to travel and were very spontaneous; they kept a packed overnight bag in the car at all times so that they could suddenly head off into the California hills if the mood struck them.

My mother didn’t want him to meet her mother, knowing as she did her mother’s insidious way of undermining relationships. He just laughed: “I’m not afraid of her!” But in the event they never met. That was okay with him; he had no interest in my mother’s family or past – he was focused on the future. (“He’s black, isn’t he? That’s why you don’t want me to meet him!” was my grandmother’s characteristic reaction – the most dire possible explanation from her point of view.)

My mother wanted to try natural childbirth. “Absolutely not,” he insisted, for which she was later grateful (although she was in fact, like me, never much helped by anaesthetic). During my mother’s pregnancy he kept putting off an important business trip until after the projected birth date, which kept getting later and later as I failed to make my appearance. Finally he could delay no longer, and so wasn’t in town when I was born; but he returned immediately once he got the news. When he visited the hospital, my mother was slightly miffed that he went to see me first before seeing her.

He hadn’t expected to enjoy fatherhood but to his surprise was crazy about me, enjoyed holding me and feeding me and playing with me. “If this kid grows up with your beauty and my brains he’ll be unstoppable,” he teased her. (As if.)

My father was away frequently on business trips about which my mother knew little. Finally, when I was still a baby, there was the business trip from which he didn’t come back. She had no idea what had happened, and for a while believed he had abandoned her. (Her harrowing childhood had led her to be slow to trust, and always to expect betrayal.) Then someone vaguely connected with my father’s business belatedly informed her that he had died in a plane crash (charter, presumably) in Latin America. If they told her more, she didn’t remember the details by the time I thought to ask about them. In later years she suspected that he had secretly been in the CIA or something of the kind.

And that’s it. All I know, or can remember at the moment anyway, about my mysterious father.