I just came across this old letter of mine, which appeared in the Opelika-Auburn News on 9 February 2001: 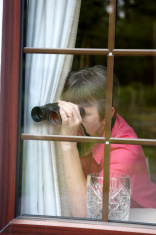 So local government officials in Alabama’s counties are upset because the state Constitution doesn’t give them the authority to impose zoning laws or to ban prostitution?

Thank about what that means. These officials are upset because they think they, not you, should have the right to decide what you are allowed to do on your own property or with your own body.

If they decide they don’t like you running a business on your property, they claim teh right to shut your business down. That’s what zoning laws mean. And if they decide they don’t like your choices about whom you have sex with and on what terms, they claim the right to interfere there too. That’s what anti-prostitution laws mean.

In other words, they think both your property and your body belong to them, not to you.

The United States was founded on a different principle: that your life belongs to you, not to the government. But we don’t think often enough about what that implies. If your life really belongs to you, then you have the right to make your own decisions about your body and your property, so long as you’re not interfering with anybody else’s freedom to do likewise with theirs.

Sunday’s Opelika-Auburn News quotes professor Wayne Flynt arguing that without zoning laws and anti-prostitution laws we “have no control over what happens right next door”to us. But since when are we supposed to have control over what happens next door to us? If we don’t like the way our neighbors are living, we have the right to argue with them, or to shun them, but not the right to impose our preferences on them by force of law.

Thats why I vote Libertarian.

(But it’s now been a while since I voted Libertarian (or at all); Barr/Root drove me away in 2008, and it’s going to take more than Johnson/Weld to lure me back.)

If You Love Freedom, Thank an Anarchist
Glitch in the Matrix

2 Responses to Who Are the People In Your Neighbourhood, and How Can You Control Them?