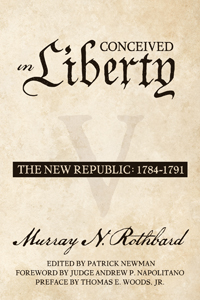 The long-awaited (to put it mildly) 300+ page fifth volume of Rothbard’s history of the American founding, addressing the crucial period of the Constitutional Convention (which, you will not be surprised to learn, Rothbard views as something less than a heroic miracle of liberty) is finally available, both in print and as a free download.

I just back from seeing Joker. Liked it a lot.

a) I noticed a Batman reference, specifically a 1966 Batman tv reference, that I haven’t seen anyone else comment on: namely, when we first meet Bruce Wayne, he slides down a pole.

b) I’ve read several reports saying that Alan Moore’s The Killing Joke is the only story from the comics that they drew significantly from. Not so: the whole talk show appearance scene, including kissing the fake Dr. Ruth, is directly inspired by a scene in Frank Miller’s The Dark Knight Returns (even if the resulting body count is a bit lower).