Phil Magness has performed a great service for the history of individualist anarchism by tracking down and publishing some of Lysander Spooner’s hardest-to-find works, in two volumes: 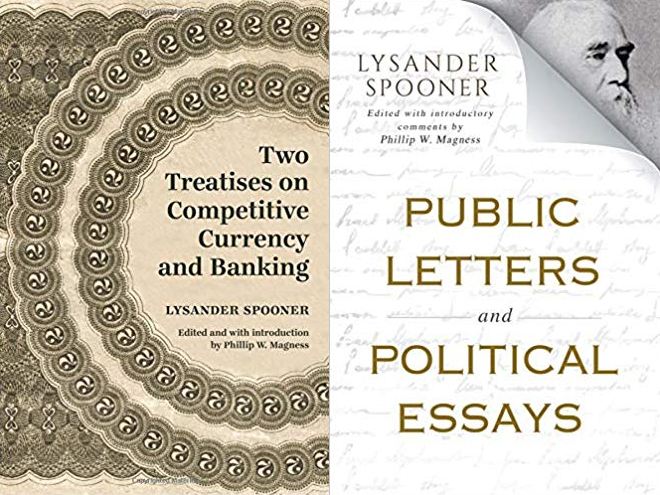 “Available for the first time in over 140 years, these two ‘lost’ treatises [What Is a Dollar? and Financial Imposters I-IV] by libertarian legal philosopher Lysander Spooner present his vision for a radically decentralized monetary system rooted in privately issued competitive currencies and free-banking. …

Once presumed to have been destroyed in a turn-of-the-century fire, these writings contain Spooner’s most extensive foray into economic theory and reveal new insights into his distinctive and uncompromising free-market vision. …

Spooner’s articulated theory of radically decentralized competitive currencies might be seen as something of an intellectual grandfather to the rise of cryptocurrency in the present day.”

“This collection brings together the political writings and short essays of Lysander Spooner for the first time in a single volume. Spooner’s editorials span topics ranging from abolitionism and the Civil War, to free banking and currency, to the trial of President Garfield’s assassin, to government corruption in Massachusetts during the Gilded Age – all with biting wit and an uncompromising disdain for politicians.

Containing over 40 years of newspaper editorials as well as the complete set of Spooner’s contributions to the magazine Liberty, many of these essays have been out of print for over a century. For any fan of Spooner’s political philosophy, and the idea of human liberty generally, this collection is essential reading.”