Irfan’s recent post on John Le Carré has inspired me to pull out of mothballs this post I’ve been sitting on (forgot about it, really) for a few months now:

I’m a fan of John Le Carré’s George Smiley novels. (I haven’t read any of his non-Smileyverse novels. Nothing against them, just haven’t gotten around to them.)

Le Carré, like Ian Fleming, is a spy-fiction writer who had actually been a spy in real life; but Le Carré is not a fan of Fleming, and says he created the pudgy, plodding, aging, bespectacled, self-effacing (but brilliant) Smiley with the chronically unfaithful wife as the anti-James-Bond, stressing seedy realism and moral greyness over Fleming’s romanticised version of spy life. 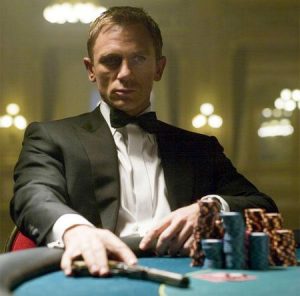 Fair enough, although I would point out (indeed, have pointed out; see here, here, and here) that the early Bond novels (unlike most of the movies, and unlike the later novels where Fleming was starting to imitate the movies) are less stereotypically Bondesque; Fleming’s Bond (whom Le Carré dismisses as a “neo-fascist gangster” who cares only for his endless string of martinis, fast cars, and female conquests) is originally a pill-popping neurotic plagued by bad dreams at night and moral doubts by day; and he doesn’t always get the girl either. Moreover, the opening paragraph of the first Bond book (“The scent and smoke and sweat of a casino are nauseating at three in the morning. Then the soul-erosion produced by high gambling – a compost of greed and fear and nervous tension – becomes unbearable and the senses awake and revolt from it.”) is decidedly unromantic.

And on the other hand, Le Carré’s work isn’t always as much the antithesis of Bond as one might think. In The Night Manager, for example (a Smileyverse novel though not a Smiley novel), we get exotic international settings, a megalomaniacal villain, and a handsome, omnicompetent spy who seduces the villain’s girlfriend – all much more Bondesque than Smileyesque. (Indeed the excellent tv adaptation starring Tom Hiddleston inspired a fan campaign calling for Hiddleston to play Bond, for which I am totally down.)

Which is not to say that the Le Carré/Fleming contrast is wrong; it’s just somewhat exaggerated. 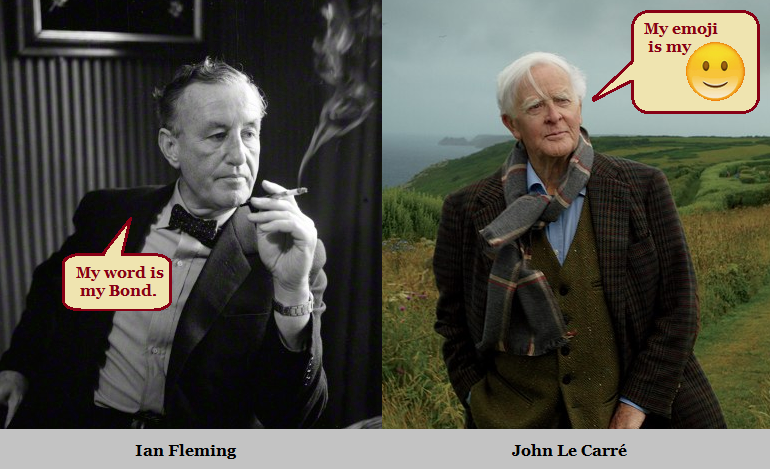 Le Carré is certainly a better writer than Fleming; here’s a sample, from The Spy Who Came In From the Cold:

It was cold that morning, the light mist was damp and gray, pricking the skin. The airport reminded Leamas of the war: machines, half hidden in the fog, waiting patiently for their masters; the resonant voices and their echoes, the sudden shout and the incongruous clip of a girl’s heels on a stone floor; the roar of an engine that might have been at your elbow. Everywhere that air of conspiracy which generates among people who have been up since dawn – of superiority almost, from the common experience of having seen the night disappear and the morning come. The staff had that look which is informed by the mystery of dawn and animated by the cold, and they treated the passengers and their luggage with the remoteness of men returned from the front: ordinary mortals had nothing for them that morning.

One departure from realism is the elastic ages of the central characters, particularly Smiley and his right-hand man Peter Guillam. If they were really the ages they’re depicted as being in the early books, then by the latest book they should be centenarians, which they evidently are not. Instead their ages shift over the course of the series; for example, in the first book we’re told that Smiley recruited Guillam during World War II, but by the fifth book Guillam is implied to have been born in 1933, which would make him a tad young for espionage work in the war.

Le Carré has been justly criticised for his poor handling of female characters. With a few honourable exceptions (like former MI6 analyst Connie Sachs in the “Karla Trilogy,” memorably portrayed in full scenery-chewing mode by Beryl Reid in the BBC adaptations), women in his novels tend to be glamourous, inscrutable ciphers; and his descriptions of them can make painful reading. Consider this sample, from Our Kind of Traitor:

Please make it stop. (And see here for further examples of the same kind.) Le Carré’s literary talent seems to desert him when he moves from discussing foggy airports at dawn to discussing flesh-and blood women. (But admittedly I haven’t read The Little Drummer Girl, a female-led tale said to be one of his best, nor have I seen either of the adaptations.)

[As I note in the talkback on Irfan’s blog, another legitimate criticism of Le Carré’s work is that his focus is on the agents agonising over the morally dubious things they’re asked to do, rather than on the lives those agents are impacting. (Sometimes the agents go ahead and do the morally dubious thing; sometimes they refuse. Both are sympathetically portrayed.) On the other hand, they say “write what you know,” and Le Carré does know more about being a conflicted agent than about being an ordinary person either screwed over or protected by such agents.]

All but three of the Smiley novels have been adapted (and adapted rather well) for film or tv; in earnest whereof I’ve assembled some clips. Be warned: the clips do contain some spoilers:

1. A Call for the Dead (1961) was filmed as The Deadly Affair in 1966. The character of George Smiley (played by James Mason) had to be called “Charles Dobbs” because at that point a different company had the film rights to Smiley. Changing the clever and apposite title (Smiley realises the victim’s death was unlikely to have been a suicide when he learns that the victim left instructions to be called the next day) into a dumb and misleading one seems to have had no analogous justification:

Clip 1: Our Eyes Were Dewy

Clip 2: We had No Option

2. A Murder of Quality (1962), starring Denholm Elliot as Smiley, was made into a tv-movie in 1991 (this one is the odd man out among the Smiley novels, in that it’s really an ordinary murder mystery with no connections to international espionage, except that the sleuth who’s trying to solve it [i.e. Smiley] happens to be a professional spy). You may recognise more than one familiar face in the … dark night:

3. The Spy Who Came In From the Cold (1963), which picks up plot threads from Call for the Dead, was made into a film in 1965 (and AMC has been talking lately about remaking it as a miniseries, though frankly it seems too short for a miniseries; the under-two-hours movie covered the whole story pretty well). This book and movie made Le Carré’s career, enabling him to quit the espionage biz and become a full-time writer. Rupert Davies played Smiley, but none of the clips I’ve found online feature him. You’ll recognise Richard Burton as the lead, Alec Leamas:

(The book appeared a year and a half after Fleming’s similarly titled The Spy Who Loved Me. Was the choice of title a deliberate mockery on Le Carré’s part?)

4. The Looking Glass War (1965) was made into a film in 1969 (though the character of Smiley was dropped from the movie version; this was before Smiley had become as popular as he is now):

Clip 2: You Are Spies

5. Tinker, Tailor, Soldier, Spy (1974), the first of the “Karla Trilogy” (because it features [without ever quite being about] Smiley’s war of wits with Karla, his opposite number in Soviet Intelligence) was first made into a miniseries in 1979, starring Alec Guinness as Smiley. Guinness’s performance cemented Smiley’s public popularity (and won me over as a teenager – the same year that I saw my first James Bond movie, the dreadful Moonraker). Check out Beryl Reid’s brilliant turn as the aforementioned Connie Sachs, amd Patrick Stewart as Smiley’s taciturn nemesis, Karla:

… and then into a film in 2011, with Gary Oldman as Smiley, and John Hurt as his boss, Control:

Here’s Oldman’s version of his initial meeting with Karla (we saw Guinness’s above):

It’s a nice change to see the “we’re not so different speech, you and I” given by the hero (if “hero” is quite the word for someone as morally compromised as Smiley) to the villain for once instead of vice versa.

6. The Honourable Schoolboy (1977), the second of the “Karla Trilogy,” was considered as a follow-up Guinness miniseries to Tinker, but was skipped because the locations (Hong Kong and Southeast Asia) made it too expensive. They could tackle it now, but they’d have to use CGI, since Hong Kong today looks very different from the way it did in the 1970s:

7. Smiley’s People (1979), the final entry in the “Karla Trilogy,” was made into a miniseries in 1982 with Guinness again (for a while there was also talk of a movie version with Oldman to follow up the 2011 version of Tinker, but that seems to have fallen through):

8. The Russia House (1989) doesn’t feature Smiley, but it does share characters with the Smiley novels and so belongs to the “Smileyverse.” It was made into a film in 1990, with a lead actor best known for playing a certain neo-fascist gangster:

9. The Secret Pilgrim (1990) is probably too episodic to be adapted for the screen. Incidentally, it’s primarily through connections to this book (i.e., sharing characters) that the two Smileyverse-but-no-Smiley novels are part of the Smileyverse.

10. The Night Manager (1993) is the other Smileyverse-but-no-Smiley novel. It was made into a miniseries in 2016 (starring Bertie Wooster vs. Loki!):

(Would the author approve of such Bondesque opening credits? Well, as noted above, this is an unusually Bondesque story for Le Carré anyway.)

(The white-haired man at the adjoining table, to whom Hiddleston apologises, is once again Le Carré himself.)

Here too, talk of a possible sequel seems to have died off.

Incidentally, Olivia Colman’s character (the agent who recruits Hiddleston’s character) might seem like an exception to Le Carré’s poor handling of female characters, except – she’s a man in the books.

11. A Legacy of Spies (2017), the most recent Smiley novel, is probably too dependent on The Spy Who Came In From the Cold (it’s a retelling of the same events from a different perspective, and through the lens of Tinker) to be independently filmable. Maybe AMC can borrow elements from it if they still want to stretch Spy into a miniseries. 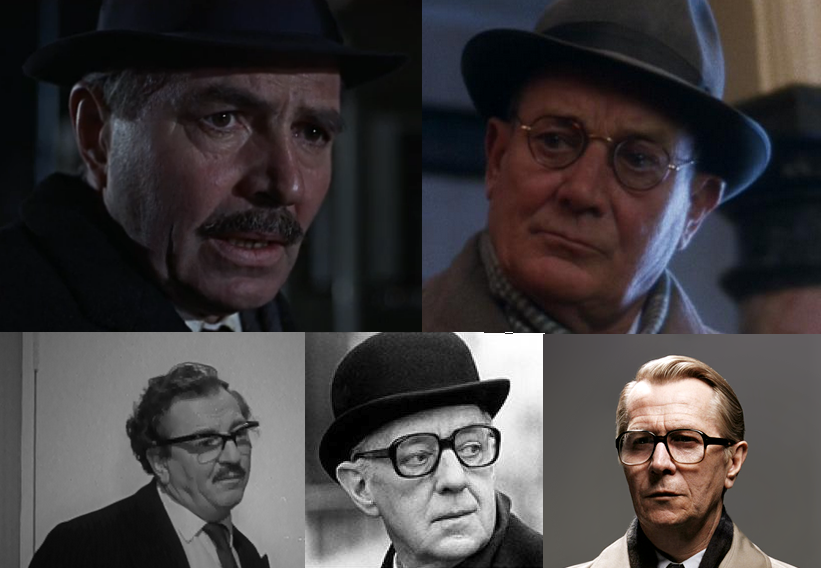 Remembering the Fagos
Time Will Run Back

14 Responses to The Spy Who Wrote Me