Murray Rothbard famously (well, famously in libertarian circles) condemned Adam Smith for positing an “an alleged irrational and innate ‘propensity to truck, barter and exchange’, as if human beings were lemmings determined by forces external to their own chosen purposes.”

As I’ve pointed out before, this interpretation is difficult to square with Smith’s own words:

Whether this propensity be one of those original principles in human nature, of which no further account can be given; or whether, as seems more probable, it be the necessary consequence of the faculties of reason and speech, it belongs not to our present subject to enquire. [Emphasis added.]

In other words, far from regarding this propensity as a brute irrational instinct, Smith makes clear that he regards it as more likely to be a byproduct of our rational faculty.

In a recent column provocatively titled “Down with Truck, Barter, and Exchange!,” my friend Jason Kuznicki raises a criticism of Smith similar to Rothbard’s. According to Jason:

Instead, Jason maintains, all that humans have is a “a propensity to seek perceived advantage,” which might or might not involve exchange, depending on the circumstances.

Jason’s position seems right in and of itself, but it’s a mystery why he considers it at odds with Smith. Why on God’s green earth would anyone think that in calling the propensity to trade “natural” Smith must mean that it’s a propensity to value trade for its own sake rather than as a means to some further end? Smith does say that when people trade they ordinarily “ha[ve] in view no such extensive utility,” but the more extensive utility Smith’s referring to is the “general opulence” of society that results indirectly from trade; he never means to deny that trade is sought as a means to the trader’s advantage. After all, just a few sentences later Smith describes the operation of the propensity in such a way as to make utterly clear that trade is ordinarily a means to the further end of the trader’s own advantage:

[M]an has almost constant occasion for the help of his brethren, and it is in vain for him to expect it from their benevolence only. He will be more likely to prevail if he can interest their self-love in his favour, and shew them that it is for their own advantage to do for him what he requires of them. Whoever offers to another a bargain of any kind, proposes to do this: Give me that which I want, and you shall have this which you want, is the meaning of every such offer; and it is in this manner that we obtain from one another the far greater part of those good offices which we stand in need of.

My client, Adam Smith, is not guilty. (On this point, anyway.)

I have another Libertarianism.org post on ancient Greece up; this one’s on Aeschylus’s Eumenides. 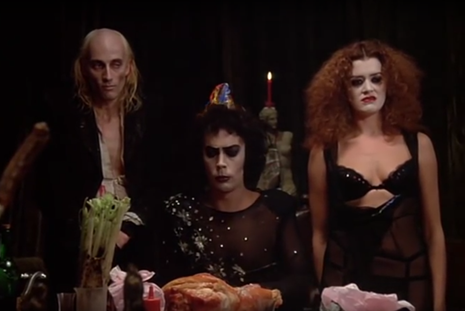 Awkward evenings around the dinner table.